Of all the icon G1 transformers Jetfire has had a turbulent past and I hope I can shed some light on this.

In 1982 Takatoku Toys introduced their line of Macross toys and one was the Macross 1/55 Super Valkyrie VF-1S figure. A jet that turned into a robot and also had a third “Gerwalk” form that was half jet, half robot. After Takatoku Tous went bankrupt in 1984, their designs were purchased by Bandai, who then licensed some of the molds including this very toy to Hasbro who had to meet the demand for new Transformers toys. Bandai themselves had a minimal American presence at this time and tended to license toys to American companies instead of distributing them themselves.

Basically the only things that changed was the accent colors to Red and Black and the removal of the skull and cross bones from the tail fins although some examples have appeared with them.

The Transformers cartoon when aired in Japan, instead of giving Takara’s rival free publicity they gave Jetfire  a name tweak to Skyfire and extensively changed the animation model. This is likely due to it being an expensive toy and needed the extra advertising in the western market. The basics of the the animation and comic book stayed within toy image, he was red, white and was a jet but was given a more human face.

In 1995 Hasbro released closed their initial G1 line and released their G2 line, and Jetfire was given a new form. A variant of the F-22 Raptor, Interestingly he has factory applied Decepticon symbol stickers, but came with optional Autobot stickers to correct this along with a number of other option stickers. This time his colors were changed to two toned Grey and Blue.

Being shelved for so long, I guess they thought it was a good idea to change up his alternate form. In 2003 he was released in Hasbro’s Armada line as an Ultra Class figure and Takara also released him as well. He became a futuristic space shuttle in White and Grey with Red and Black stripes. He had one repaint replaced much of the Gray and Red with Blue. 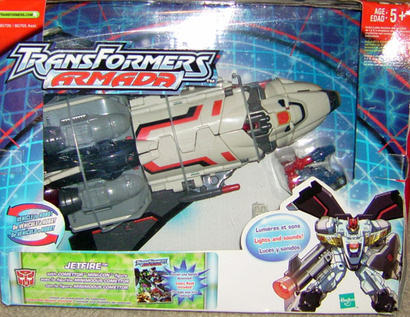 Then in 2004 he got another although smaller Mega class figure in pretty much the same White, Red and Grey colors in Hasbro’s Energon line, Takara also released their version:

In the Cybertron line that Hasbro brought out in 2005, Jetfire got a whole new look with two different sized toys (One was Ultra class and the other was Legend class, but were pretty much the same) but this time transformed into a Green, White and minimal Red cargo plane resembling a modified Antonov An-225. He also got a another repaint in Tan, Gold and Black of his Ultra class mold but with the name of Sky Shadow his name while working under cover in the Decepticon ranks.

Titanium Series in 2006 brought out a Jetfire in a cybertronian jet form back in his familiar Red and White colors.

In 2006 Hasbro introduced us to their Classics line, with the intent of re-imagining older toys with new current alt forms and Jetfire was released. His jet mode is somewhat based on the F-14 Tomcat (itself the inspiration for the Macross VF-1 Valkyrie design who was the original Jetfire.) He also had a removable face plate that resembles his original toy face, while under it is a more cartoon inspired face. Two years later Takara would release their version of this mold under the Skyfire name with less Black and Red. Two years after that Takara would once again release this toy under the name Dark Skyfire but his colors are Black and Purple

2006 would also be the year that Hasbro introduced a legends class toy named Jetfire, itself a repaint in Red and White of Legends of Cybretron Thundercracker

The Transformers Animated cartoon in 2008 brought out a version of Jetfire but this time he was a bit odd. He was Orange and White and had a twin brother name Jetstorm who was two toned Blue. These two could dock together to make a strange ship but basically were just each other belly to belly (I couldn’t even make this stuff up). They had their own robot modes but could connect together to make another bot named Safeguard who was both down the middle… (He had a thick Russian accent…)

The film Revenge of the Fallen in 2009 ushered in a new take on Jetfire and a whole slew of toys in various size classes including Leader Class. His color was Black, He was old, with a Yorkshire accent and transforms into an SR-71 Blackbird spy plane.

In 2014 as part of Hasbro’s thrilling 30 sub-line of their Generations line, saw a new Leader class Jetfire. This time he was back in White and Red, has five attachable weapons that can combine into one super weapon and a booster rocket backpack all in chromed Red. He once again has a removable face plate that resembles his original toy face, while under it is a more cartoon inspired face. He was at first a Convention exclusive but shortly after went to general retail. (I have him, I like him a lot!) The same year Takara also released their version of this same mold but with slight differences in paint and non-chromed Red.

Well we have reached the end of another report.