I decided to switch things up a bit and go with one of the Beast Wars characters who in my mind has made a big impact and certainly has a lot of toys.

In 1996 Hasbro relaunched Transformers and they decided to leave behind vehicles and go with animals as an alternate mode. Let’s face it, animal toys have been a big winner with children since prehistoric times. So this choice was a no-brainer and it rejuvenated and refreshed a stagnated brand allowing the company to return to vehicles at a later date when it could be fresh again. So BeastWars was born (known as Beasties in canada due the “war” word was a no-no!… stupid I know but what can ya do?) Initially it was met without rage from die-hard fans but they soon mellowed and it became very popular.

Cheetor basically fills the role of Bumblebee, the little brother type who is sometimes rash and needs guidance. His initial toy transforms into a generic looking cat in yellow with spots, (allowing for repaints for other characters such as Tigatron and Shadow Panther/ Tripredacus Agent) His robot mode is armed with a rifle made out of his hindquarters / tail, and a second gun formed out of his stomach that has a Water-squirting gimmick. He features a second flip down mutant head that replaces his standard robot face as was common among the toy line. This toy has had many paint variations over the course of time: 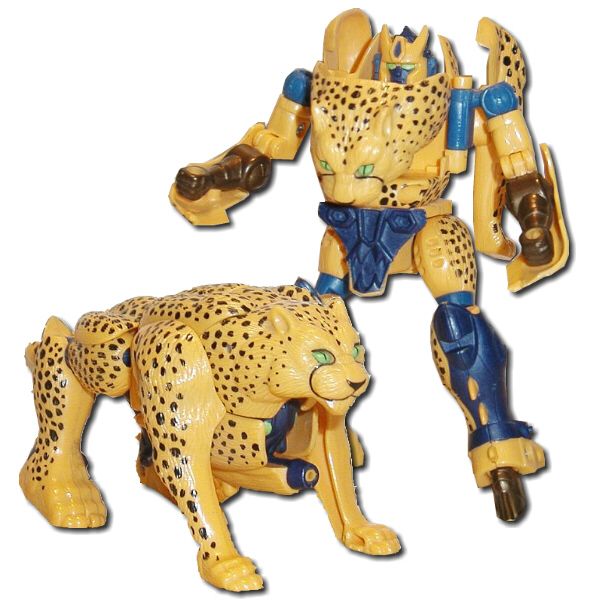 In an attempt to keep the original line up fresh with a new take came the Transmetal sub-line and of course more Cheetor:

Shifting slightly in story to make more toys while keeping it fresh again, we got the Transmetal 2 sub-line with an all new toy: 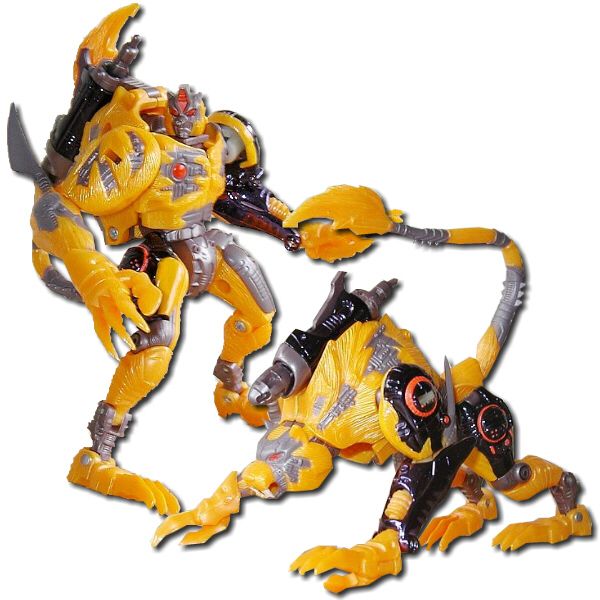 In 2000 Hasbro switched gears and re-envisioned BeastWars into BeastMachines under the explanation that they returned to Cybertron and were changed yet again. Cheetor became a technorganic cheetah in yellow with some green trim and black spots. His initial toys came in two different sizes: 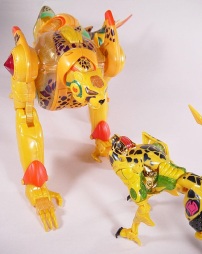 In 2001 they decided to  re-brand the line as Battle for the Spark Beast Machines and it produced two toys for him:

In 2008 came a much leaner meaner version of the toy, much more in scale with a real cheetah but the robot mode had a bit of hunch back.

In 2009 there was two transformers that converted from a USB stick to a cat (Tigatron & Ravage) and a year later they were repainted for Cheetor.

In 2011, much later, after the Transformers Animated line stopped, they made an an addition:

well this has to be the most involved entry I have ever done, with lots of tweeks and fiddling around with the entries. I am so glad to be done! I am sure I missed a product or two but there is no going back now Big Bot!