(Writing about the good guy cat Cheetor, got me inspired to write about a bad guy cat, and so I naturally went with Ravage, I know I touched on him in another post but there is more then just one toy with this shadowy cat and more story too!)

As far as Iconic Transformers go, Ravage comes to mind very easily! Although he has not had a lot of toys he still has had a rich history crossing multiple alternate realities. In one these stories, they used two of his past occurrences to present a nice current version of him and I will get to that a little bit later so please hang in there. From the start Ravage has stood out, as a black jaguar he in some instances is about the size of a real wild cat of that nature. (In other scenes he is bigger or even smaller and this can be explained by his size shifting ability to transform into a cassette tape.) Kid’s were naming their cats after him, he was that cool. The sound of Soundwave saying: “Ravage eject!” in that metallic sounding robot voice sent thrills up children’s spines. So now we will get into the toys.

1983 – TAKARA released their first wave of Microchange toys and the second one to be created was: 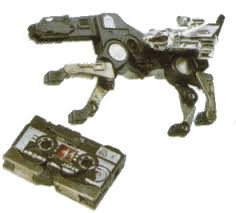 1996 – with such a long break in action Ravage made a return in the Beast Wars Cartoon and toy line. Ravage was one of the few Decepticons who was granted amnesty at the end of the Great War and reformatted into a Predacon, he was given a humaniod type robot body but could also change into a cassette type devise but it was unknown if he had a puma style body as well. The Tripredacus council on Cybertron (a faction of the Predicons) dispatched Covert Agent Ravage in a prototype cruiser to track and terminate the renegade Megatron. He used his advance ship go to re-historic earth, where he jumped to Megatron‘s side due to his loyalty to a message from the original Megatron’s that the renegade showed him. He was killed when his ship blew up due to the efforts of the Maximal Rattrap. His detached head was seen sinking into the water of earth. Parts of his ship’s fate was unknown and this is point B in my soon to come sub-story yet to come. As for toys he did not initially get a toy but there was Shadow Panther, a black Takara repaint of Cheetor, this toy was re-purposed as Ravage later the same year and now they are considered one in the same: 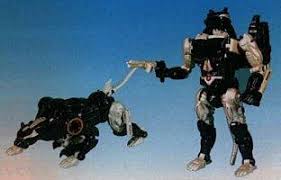 Transmetal 2 sub-line came along in 1999 with an all new toys for everyone but not until later did Ravage get a toy:

In 2004, Hasbro’s Energon line brought in Ravage as drones, he was many and he had to have an addition to his name for licensing reasons so while they were at it they gave two different versions:

The release of Alternators were remarkable for their vehicle modes turned into fully licensed models of existing cars, with opening hoods and doors with sculpted seats and rubber tires. I can now get to the sub-story about Ravage I have been taunting you with: It was revealed that, years before, the government organization known as the “Intelligence and Information Institute” had unearthed the flight recorder from Ravage‘s Transwarp cruiser that crashed on Earth during the Beast Wars which contained a copy of the Decepticon’s personality. They were able to contact this personality and made a deal to upload this program into a Binaltech body, giving it a brain but not a spark. To overcome this they had the original Ravage who was statis-locked into cassette form and they sealed him into the car’s cassette player to give the body a spark making him a whole being again. (two odd things here.. one is, why does a 2004 car have such a player in the first place and also this deviates from the later explanation of ravage leaving earth to never return, but this is an alternate reality after all so strange things happen)

In 2008 Universe line  for the 25th anniversary of the Transformers brand features Ravage in a new-mold toy In his cassette mode, he is compatible with the original Soundwave and can carry the original Ravage‘s weapons although his hips have molded in unpainted tiny versions of his weapons. He came packaged with Autobot Hound and the only difference between the Takara’s Jaguar version is the latter is significantly darker metallic gray on his legs.

With the release of Revenge of the Fallen live action movie in 2009 we saw quite a few Ravage toys. In the movie he was a huge robotic jaguar with one eye.

In 2010 Takara released a bunch of USB drives:

Part of the first wave of Generations Legends Class toys in 2012, Ravage transforms from a “data disc” into a robotic jaguar of course. He can interact with Voyager Class Soundwave and his mold mates Blaster and Sound Blaster. He can be stored and launched out of Soundwave‘s chest compartment, and he features a partial, spring-loaded transformation to cat mode that is triggered when a button is pressed. He comes with a clear-purple plastic case to store him in disc mode. He came in a two pack with Rumble. (I have this one, I like him)

Part of the first wave of Prime: Beast Hunters Deluxe Class toys in 2013, Soundwave came with a tiny little  Ravage who transforms from a robotic black jaguar with brown legs into a combat harness that pegs into Soundwave‘s chest via a 5mm-compatible peg on Ravage‘s underside. (I have this one and he is cute, he can also turn into a slasher weapon as well) He was also released by Takara in all black.

The Masterpiece line brought about two ravages based on the same new mold:

Well the path of Ravage has brought us to end of this blog but his story will continue and I will be there to report it.

One thought on “In the shadows with Ravage!”