Created for the 1986 The Transformers: The Movie:

In 2007 Transformers Animated reintroduced two old favorites to us and some new females as well: 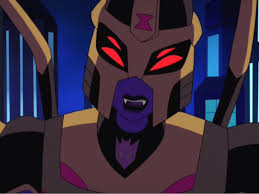 2009 live action film Revenge of the Fallen gave us three different beings, one old favorite and one new and the third who is an homage to another character but never made it into the film.

Windblade: the first officially fan-created Transformer ever, the result of Hasbro‘s “Fan-Built Bot” initiative program that had two polls on Hasbro‘s official website. fans helped determine her character and some of her physical traits (her Japanese motifs weren’t an option but a choice by the design team).

Nautica: Although she did not get a toy she was still in the comics, she turns into a purple submarine.

Chromia: 29 years later and she is back with a decent toy. Although her robot mode is similar she was given the form of a Cybertronian canopied motorcycle. 2015:  Transformers: Robots in Disguise brought out a new female character: So we come to the end, Transformers has always been a boys toy, it has been mostly focused for boys, but occasionally we see a girl get in there and the love for these girls endures, I for one hope to see more in the coming years. (I have missed the odd one here or there but I covered the main ones)