I know I did a Grimlock entry before but it does not line up with my new format and could not be remolded so I am going to revisit him in my new format.

1983 – Takara – Unknown class – Dinosaur Robo Tyrannosaurus: A robotic Mech in the form of a Tyrannosaurus He came with a little robotic driver that fit in his cockpit in his back. He also came with a sword, a gun, and a rocket launcher with three rockets.

1985 – Hasbro – Unknown class – Grimlock: This version has a number of small changes to the original, his Blue pelvis was changed to Red, His Chromed Silver sword was changed to flat Red, his driver was dropped but early examples retained the cockpit and later ones came with it sealed. Also his teeth were altered to not be so sharp for safety reasons.

1989 – Hasbro – Unknown class – Classic Pretender Grimlock: A full new mold but much smaller and simplified version of a robotic Tyrannosaurus that fits inside of a Human shell that has armor and a large gun, His tail has to be removed but becomes a second gun. The inner robot was also sold separately twice, once as a K-Mart exclusive and once in Japan

1993 – Hasbro – Unknown class – G2 Grimlock (dark blue): The most common of the three different color schemes he was given for Generation 2

1993 – Hasbro – Unknown class – G2 Grimlock (medium turquoise-blue): The next most common of the three different color schemes he was given for Generation 2 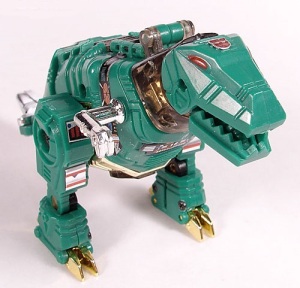 1993 – Hasbro – Unknown class – G2 Grimlock (silver): The rarest of the three different color schemes he was given for Generation 2. basically the same as his G1 version but with an Autobot symbol on his leg

1997 – Hasbro – Deluxe class – Beast Wars Grimlock: not a character on the show but he did get a toy, this time a repaint of Beast Wars Dinobot in Gray, Gold with Black spots, transforming into a raptor dinosaur.

2005 – Hasbro – Mega class – Energon Grimlock: He came with Swoop who the tow can combine into Mega Dinobot. This version saw a repaint later on as a G1 inspired toy

2006 – Hasbro – Deluxe class – Classics Grimlock: A brand new toy, that takes cues from both G1 and Pretender versions with styling changes due to modern thinking of what the Tyrannosaurus is like now. Takara also released a metallic version

2008 – Hasbro – Voyager class – Animated Grimlock: The first animated was at the time the biggest Grimmy around, he also got a smaller version

2009 – Takara – Masterpiece class – Masterpiece Grimlock: A return to his G1 styling with cues to his cartoon version. He has had 3 other repaints with Hasbro releasing 2 of those.

2012 – Hasbro – Voyager class – Generations Fall of Cybertron Grimlock: A new mold taken from the video game, he was also given a more G1 paint scheme that is really nice! I have both and I prefer the G1 version much better. Takara also released a Fire Blast version in all metallic Red.

2014 – Hasbro – One step changer class – Electronic Stomp & Chomp Grimlock: The biggest Grimmy yet, at 22 inches high, he is simple to transform, and is not the first toy he had in the movie line and not the last, he had too many to list here.

2014 – Hasbro – Legion class – Robots in Disguise Grimlock: done all in green and black he was a decepticon who changed sides, he also came in another size and with one repainted to be G1 like

well there you go, my first entry in over a month, and this was a re-do for me, I might have missed some on purpose for size but Grimmy is the king baby and he is worth a re-do

3 thoughts on “Grimlock revisited! (Dino only)”