Ratbat may bit be one with the most toys but he does not care, He is a bat and bats are cool! So I thought I would do a short entry about him…. not meaning he is short or anything… don’t tell him I said so!!! 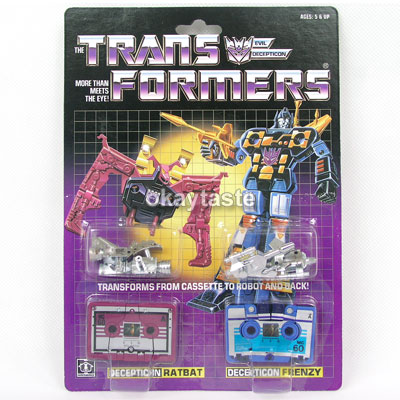 2014 – Hasbro – Unknown class – SDCC 2014 Kights of Unicron Ratbat: A San Diego Comic Con exclusive and part of a set that features  Optimus Prime, Jazz, Megatron, Laserbeak and Soundwave in a rock band theme with cloth and fake hair. He basically is a slight repaint of the Animated version with Gold stripes along his wings.

2013 – Takara – Masterpiece class – Ratbat: As part of the Masterpiece line, He comes packed with Soundblaster, He is a whole new mold and has hid rockets built in to his cassette mold.

2015 – Hasbro – Mini-con class – R.I.D Ratbat:  transforms from a bat into a Cybertronian torpedo. He includes translucent accessories, which can be attached to him using tabs and slots. Some of these parts can be combined with others from Beastbox, Sandsting and Velocirazor to form a shark.