So I had wrote about Whirl and so I felt the need to talk about his pre-transformers toy line mate Roadbuster. He was part Takatoku Toys toy line called Special Armored Battalion Dorvack, unlike Whirl he did receive quite a few toys and his name was given to Ironhide in Japan (I will leave ironhide out of it though)

1983 – Takatoku Toys – Deluxe Class – Mugen Calibur: He transforms into a made up tank of some kind in Yellow, Orange and Grey

1985 – Hasbro – Deluxe Class – Roadbuster: A repaint of the original toy but in Orange, Green and Brown 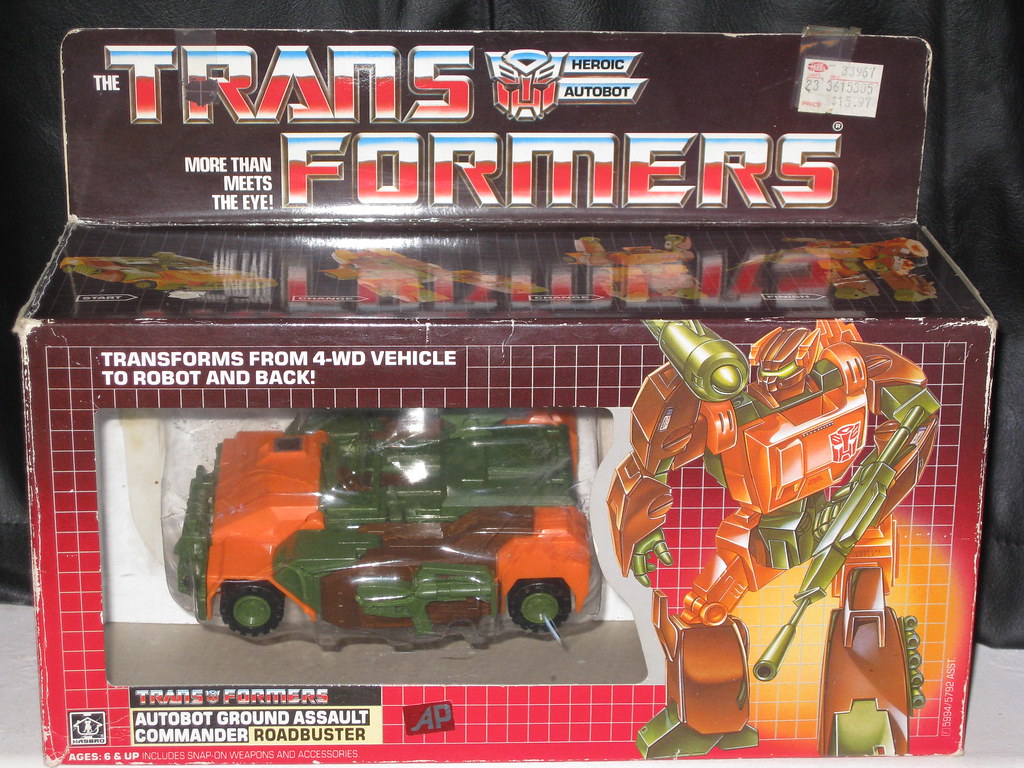 2008 – Hasbro – Voyager Class – Universe Roadbuster: He was a Target exclusive redeco of Cybertron Defense Hot Shot that transforms into a M1117 Guardian Armored Security Vehicle in his normal Orange, Green and Brown. Like the rest of the line he comes with a cyber key that when plugs into a special slot on him, gun turrets open. He comes in a 2-pack with Dirge

2011 – Hasbro – Legion Class – Dark of the Moon Cyberverse Roadbuster: A character from the movie line he like many “name reuse characters” is a completely new persona but does retain his Green color but is a version of Dale Earndhart Jr.’s 88 race car

2011 – Hasbro – Deluxe Class – Dark of the Moon Track Battle Roadbuster: a repaint of the last entry now in Orange and White (still very fitting for the character)

2011 – Hasbro – Deluxe Class – Dark of the Moon Human alliance Roadbuster: Back in his Green color scheme he comes with a pose-able human figure “Sgt. Recon” who can ride inside the car.

2013 – Hasbro – Deluxe Class – Fall of Cybertron Roadbuster: A prepaint of Fall of cybertron Swindle who transforms into a Cybertronian assault vehicle in mostly Green with Orange, Silver and some Blue He is also a combiner and can combine with his fellow Wreckers into the gestalt Ruination

2014 – Hasbro – Voyager Class – Generations: Thrilling 30 Roadbuster: back to his classic look and color scheme he is an off road vehicle and looks very nice

2014 – Takara – Voyager Class – Legends Roadbuster: a slight repaint to the last entry that leaves some of his clear plastic pieces unpainted so if you take a small flashlight behind them you get a light up effect 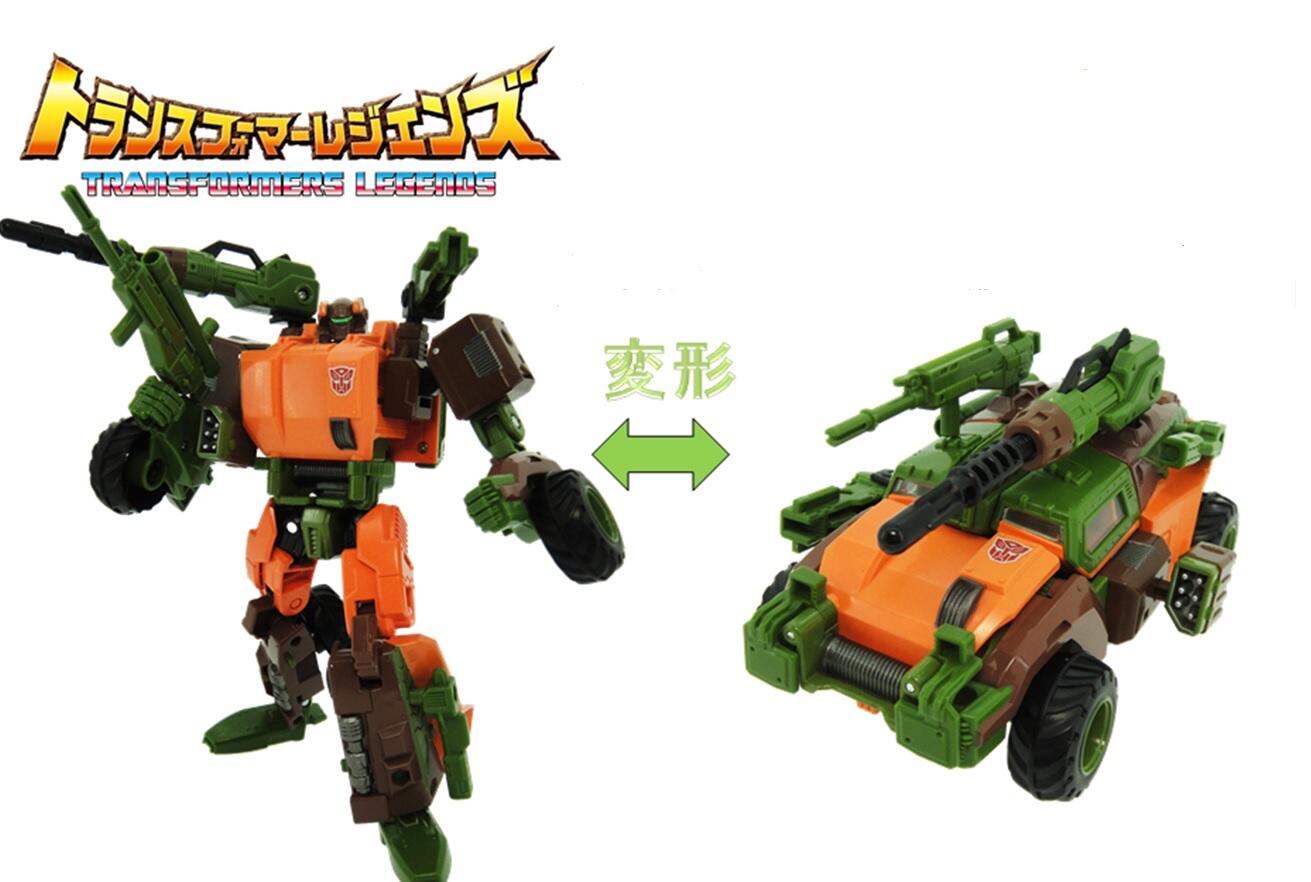 2015 – Takara – Voyager Class – Cloud Roadbuster: another repaint but this time in Red, White and Blue a homage to the Japanese Ironhide who is named Roadbuster in Japan and a reverse in colors  of our next entry 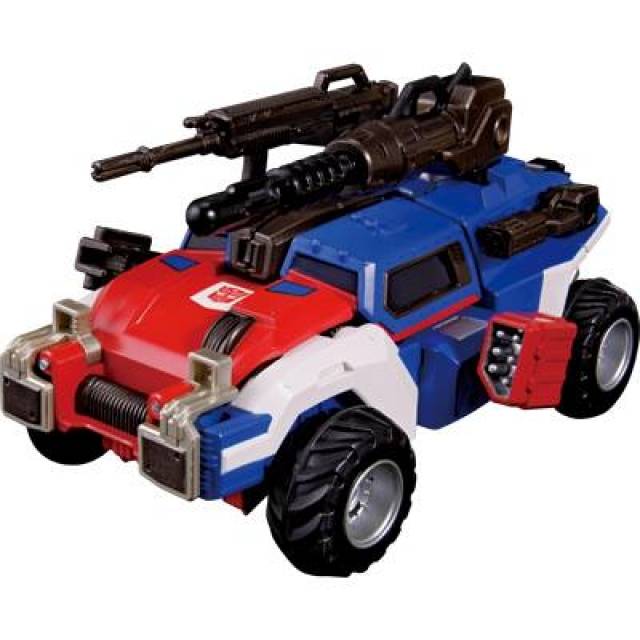 2009 – Takara – Voyager Class – Animated Roadbuster Ultra Magnus His normal colors are Red, White and Blue but he adopted a Roadbuster like color scheme of Yellow, Green and some Blue and is an honorary  member of this group

well there you go, I hope you enjoyed it and see you next time