As suggested I am going to try to explain toy size classifications, first off is that Generation 1 and Generation 2 did not have specific classes with certain exceptions like Whirl and Roadbuster were advertised as Deluxes. Then Beast Wars changed all that and introduced uniform sizing, packaging and price points so we will start here.

Armada – 2002: replaced all the names but keeping the sizes except for Basic:

Universe – 2003: returned to using the Beast Wars classes of Deluxe and Ultra only. 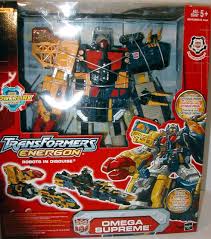 Cybertron – 2006: changed some names but kept others:

Classics – 2006: This line dropped down to 4 classes but only one modified name change, leaving the Ultra class out of it.

Generations – 2012: These names are now the new classes with the addition of one, all others are gone:

Devastator will soon join Metroplex in his class and will be a bit bigger. He will be made up of Six Voyager class figures.

Ok with all that there is some miscellaneous classing to clear up.

Masterpiece Class: Not official but it is used for all Masterpiece (and even third party figures that are intended to be of the line unofficially). This is not a size class because all figures are suppose to be in scale with each other in robot modes at least, since Megatron cannot shrink but to get around this they have included versions of him in gun mode with some figures that is in scale for the other robots to use and he comes with scope, silencer and stock (the latter comes off so it can go back on after insertion into the fist of the figure.) These are much bigger then other lines.

WST Class: Not official again but used in error by many fans calling them “World’s Smallest Transformers”, the actual name is Smallest Transforming Transformers and all of this Takara 2003 line are very small but mostly accurate renditions of G1 figures given the size (the tiny jets even have landing gear.)

Unkown Class: Not official but what some fans like myself use as a catch all for almost anything G1 or G2 or pre-Hasbro.

Seeker Class: Another unofficial class used by some fans for the seven G1 Jets (Starscream, Skywarp, Thundercracker, Ramjet, Dirge, Thrust and Sunstorm *2003 e-Hobby exclusive*) and the two G2 Jets (Starscream and Ramjet) The reason for this class for me is due to them being too large for Deluxe class and too small for Voyager class

Unknown to known class comparisons: Quite a few of G1 and G2 figures can be roughly compared to known classes. G1 Mini-Vehicles such as Bumblebee can be placed in the Legends class, G1 Cars such as Sunstreaker and Sideswipe can be placed in Deluxe but are a bit too small, a bit larger G1 figures like Megatron and Optimus Prime fit in the Voyager class and finally bigger figures such as G1 Metroplex fits in the Leader Class.

well there you go, I hope this clears up sizing and classifications, see you next time.