The company now known as Takara-Tomy has had a long standing business of selling toys. They started out in 1955 as Sato Vinyl and successful at securing the license for releasing Mattel’s Barbie series on the Japanese market. In 1960 they changed their name to Takara Vinyl and then by 1966 they shortened thier name to Takara. In 1970, they held the license for Hasbro’s G.I. Joe line on the Japanese market and therefor had an already relationship with Hasbro. The company Tomiyama Toy Factory founded in 1924 changed their name to Tomy in 1963 and was responsible for developing Omega Supreme and Sky Lynx for the company Toybox who then in turn licensed the molds to Hasbro among others. Takara and Tomy both merged in 2006 to be known as Takara-Tomy as the official name in Japan, outside of there the merged company is officially Tomy. Although in Transformer fan circles the company is still lovingly called Takara no matter the era of toy they produced. (I for one always call it Takara) Fortunately for all transformer fans, Tomy had established a working relationship with Hasbro since 1999, and so the merger didn’t have any major effects on the established Takara and Hasbro cooperation that was in effect since 1984. Takara and Tomy both have had a history of working with companies outside of Japan with their lines of toys appearing in those companies packaging and languages. I have outlined some of these, but nailing down an accurate list or actual photos is very hard.

Huffer in Blue and Yellow

Huffer in Red and Yellow 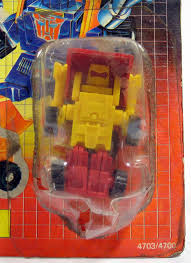 Well folks this has been a very frustrating and rewarding endeavor, I wish I could have brought more examples from other countries but either they are so rare they can be found, or they imported unaltered toys or they do not exist in those countries. So I hope you enjoy it as much as I did digging it all up. see you next time.

One thought on “History series edition 3: Takara/Hasbro in the non-US market around the world.”