No Transformers have changed the face of transforming robots quite like the Constructicons did when they arrived on the scene, much like their fictional arrival changed things in all of their alternate time lines. Nothing would be the same from there on. This success of the first combing robots into one robot made Hasbro jump, made them want to produce more similar robots and the demand for such has never really stopped. So let us look at the “big mean green guy with anger issues” (I do not mean the Hulk or me after some bad Chinese take-out) this focus is on Devastator and the Constructicons that create him!

Takara introduced toy robots that transform into realistic, present-day vehicles as part of the “Car Robots” sub-line of their Diaclone line. Unlike most of the line some did not come with little robot drivers and were not in scale with the rest, and a small group of these were:

A) The most common original release in Yellow (sometimes referred to orange since the shade of yellow is darker) and Red, with dark Blue, Yellow and Black combiner parts made up of: 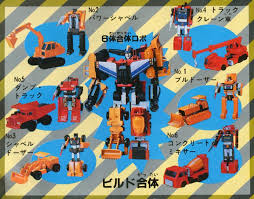 B) The rarest second release in brighter Yellow and light Blue, with Red, Silver and Black combiner parts:

Well we have come to the end of part one and we will pick up where we left off next time.

4 thoughts on “Catching up with the Constructicons Part 1”