As one of the more Iconic Decepticons, Galvatron has been the source of some confusion since he has been Megatron transformed in some realities, made by humans in the live action movie, and in the Marvel comics he was plucked from the future by Unicron where he then confronted Megatron and the two would be linked there on. IDW restarted the original G1 series as Regeneration 1 from 81 to 100 and Galvatron laid deactivated at the north pole, he was reactivated when Megatron was killed by Optimus Prime. He was then more then slightly unhinged and tried to kill Ultra Magnus, who he already killed in the reality he came from, thinking the two were linked and he even rambled on to UM about this prior to trying to kill him.

Toys, oh the toys, not as many as others but still!

1986 – as was usual with new toys for the Transformers Movie, Hasbro created the toys from concept art not the finished animation models so they could get them out shortly before the film (this is why his bio does not contain anything about being Megatron or being the leader of the Decepticons) Galvatron initially created as by Unicron from the dying body of Megatron who agreed to be Unicron‘s herald but it was not long before Galvatron‘s nature would dictate he would turn on his new master. As toys go he has had not many releases but they are all nice entries into the toy market. His first form was a a triple changer turning into either Cybertronian rifle  or cannon in shade of grey and blue unlike his movie appearance was in purple and grey. (funny thing is unicron made him but did not know what such a gun looked like)

2005 – Takara released a repainted more show-like appearance like original Galvatron, being primarily purple instead of gray. this toy was repainted slightly in 2006 as Galvatron II, it was an exclusive for Takara that stated he was a new character but his bio was the same.

2008 – Hasbro created a deluxe class toy of Galvatron this time turning into a battle tank in grey and purple with a partially orange gun barrel and  “GALV-25” on the side of the turret.

2008 – Takara also released the above version of Galvatron in a more show accurate color scheme and covered up some of the orange with dark grey and a silver turret.

2008 – Takara also created a lucky draw Galvatron from the same mold but completely cast in gold chrome and limited to 5 pieces.

2010 – Hasbro‘s South-East Asian markets by Hasbro Malaysia used the above same mold to make another Galvatron in a lighter color scheme and the barrel was returned to more normal orange plastic. He was part of the 3 pack “Challenge at Cybertron” boxed with Cyclonus and Rodimus.

1986 – Although there was quite a bit of Galvatron Merchandise the only one of real note is when Takara released a watch (along with Superion and Ultra Magnus) and it was released as a G2 product by Hasbro in 1993. This was a fully functional basic watch and by a press of a button it would transform into Galvatron and would stand up on the base but could not be removed. (the watch face was placed in his chest, his arms could swivel although they were only one piece each but one had a red gun on it.)

2014 – Third party toy maker Unique Toys created a toy called Maniaking who is their homage to Galvatron that is really nice looking with gold paint on his gun barrel and he looks great in either robot or Cybertronian Cannon. As reminder Third Party toys are not licensed by Hasbro or Takara and as long as they do not use the registered trademarks they are legally allowed to make these. They are very collectible and this one like most of the higher end toys looks great in any collection.

Other versions of Galvatron.

1998 – Takara‘s Beast wars 2 had Galvatron as a Triple Changer, transforming from robot to dragon and a drill-tank modes. it was the only totally unique Predacon mold created for the line and the only time he was a Predacon and not a Decepticon. (Beast Wars 2 was never in the Western Market but was big in the Asian Markets.)

2003 – Hasbro and Takara created an Armada line toy as Galvatron, basically a repaint of Megatron of the same line, (I actually think he looks cool, although his head being visible in tank mode reminds me of Scorponok.) 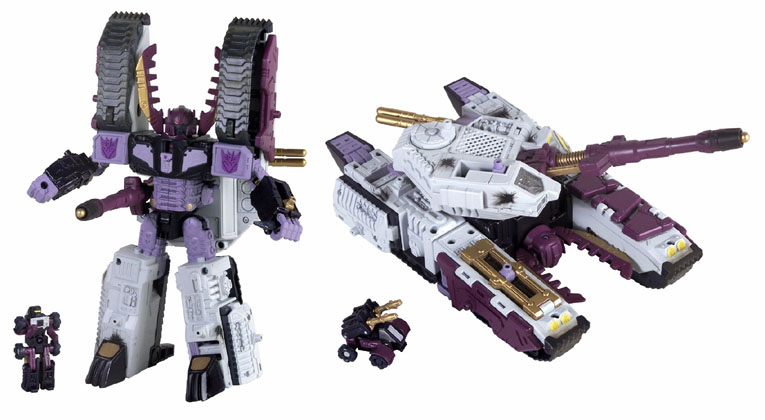 2004 & 2005 – Another Armada Megatron extensively redecoed to look like Galvatron with two color schemes (the 2005 is pictured, much nice color scheme although he looks like he is carrying a tank on his arm)

2012 – Takara’s Alternity line saw Galvatron as a Toy Hobby Market exclusive but this time as a Nissan Fairlady Z (interestingly enough this car model was used originally for G1 Bluestreak in 1984) The Alternity line saw every transformer as car, no matter what they were before.

2014 – Live action movie Age of Extinction saw humans remake the apparent dead Megatron into a live Galvatron (do not get me started on the lego swarm transformation!!) This time he became a transport truck similar to Motormaster or Nemisis Prime in grey and black. (not sure if old Megs knows he is to use the Galvatron name now)

A toy he could have been!

1986 – a concept toy that never made it off the drawing board was a triple changer which would transform between Galvatron, Megatron, and a Walther P-38 handgun with an added silencer and futuristic laser sight thingy. (not sure how that would have worked, the gun mode looks like he has Galvatron’s body planted on top as the laser sight)

This may not have been one of my biggest entries but Galvatron is always a favorite of fans and I hope this helps to shed a light on him. Thank you for reading and see you soon.