Made for the 1986 The Transformers: The Movie, Cyclonus was remade by Unicron but from who it is unclear. During the creation (or recreation) process we actually see two Cyclonuses. In the shot Insecticon Bombshell becomes one, while the Seeker Skywarp becomes another. While this is happening, Unicron declares, “Cyclonus—the warrior… and his armada.” (But really, one warrior does not make an armada.) The reasoning behind the line can be seen in the script, which states that Cyclonus is similar to Scourge (who has his sweeps) and is suppose to have multiple identical duplicates. However, the idea didn’t even survive the next cut. The group board their ship moments later, the second Cyclonus has been replaced with a third Scourge’s Sweep. And while the number of Sweeps would change constantly during the film and the rest of the series, Cyclonus was depicted as a unique individual It was as if the armada never existed in the first place. So who really is Cyclonus??? could it be Bombshell or Skywarp??? Well the answer is a tough one depending on your stance on the issue. Answer A: Bombshell who is the one in the foreground leaving poor Skywarp to become a sweep. This is the most straight forward answer but it is not the best one with fans. Answer B: Is the one that a lot of fans including myself like the best. Skywarp became Cyclonus leaving Bombshell to be a sweep. The reasoning is that Thundercracker became Scourge, (both are blue) and is one of Galvatron’s two lieutenants, so the other lieutenant should be Skywarp (both had purple colors) and was about equal to Thundercracker in status as being lieutenants to Megatron. A second bit of facts is that both Cyclonus and Scourge replaced The two seekers in the cross sell catalogs in the jet section. Also adding in that Bombshell had an in series cloning gimmick which makes him the perfect candidate for a sweep helps cement the theory. We now get the reasoning behind the answers. Whatever answer you pick, you cannot argue that Cyclonus is a cool looking Decepticon in both robot and alternate jet form. In the marvel comics line he was not created by Unicron and was Decepticon troop already around.  I will now get into the toy versions of him but I am omitting the helicopter named Cyclonus since he is separate character. 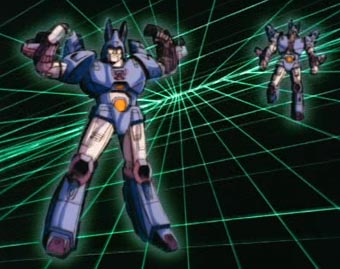 1986  He transforms into a purple Cybertronian fighter craft with some variants. Early releases had his belt and part of his “ears” painted blue and later releases left those areas unpainted. The toy in the catalog had a slightly different color scheme including a mainly silver head, it is unknown if this one made into the market or not.

1987 Cyclonus was back and basically the same toy except both his back and his hands were remolded with holes to fit his Target master partner Nightstick.

2002 an exclusive for BotCon that year was Expanded Universe Cyclonus a redeco of Beast Machines Jetstorm,  He transforms into a Cybertronic fighter jet. His jet mode cockpit/neck is geared up with the pop-up gun turret on his back so that both turn in the same direction when moved. This turret has a light-up feature plus two spring-loaded missiles. He has a “normal” robot mode and a “flight” robot mode with pop-out thruster engines. 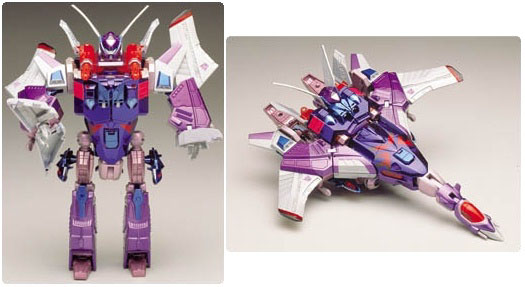 2008 Hasbro’s Classics line brought out a brand new mold for Cyclonus. He was again the cybertronian Jet from the animated movie and was even closer to it then the original toy due to the first one was based on an early animation model that was changed going into the movie. He also had his Targetmaster partner Nightstick back with him.

2010 saw two boxed sets, first was a “Challenge at Cybertron” three pack of Galvatron, Hotrod and Cyclonus in different color schemes exclusive to the South-East Asian markets by Hasbro Malaysia and the “Battle in Space” two pack (with Hotrod) which was a normal Hasbro north american release but his colors were changed yet again.

2010 Transformers Collectors’ Club exclusive, is yet again a redeco of Universe Cyclonus, but this time in red and yellows for his inclusion in the Shattered glass alternate universe where Decepticons are the good guys and so he is colors are similar to Hot Hod and vise versa.

2011 a Takara e-HOBBY exclusive 3-pack with clear-plastic versions of Galvatron, Nightstick, and Scourge. Same toy just cast in transparent purple plastics, emulating the scene in The Transformers: The Movie where he is created by Unicron

2015 Soon to be released in the Combiner Wars sub-line of the Generations toyline, Cyclonus is a heavily redeco and retool of Voyager Silverbolt and transforms into a purple Cybertronian fighter craft that looks very similar to his original alternate mode.

He will be able to combine with certain Deluxe Class Combiner Wars figures to form the torso of Galvatronus (a new character that looks similar to Galvatron) or he is an option to make your own combiner giving now four to five torso options and quite a few leg and arm choices along with accessory robots to choose from for weapons and chest plates as well. His official part listing is as follows

His toy line might be limited and the debate on who really was in the movie time line rages on depending who you talk to but one thing is for sure, Do not cross Cyclonus!

One thought on “All fear Cyclonus!”