One thing is for sure little boys love Firetrucks and they dream of riding in one of those big truck as they roll along to fight fires and save lives, I know I did! I got to sit in one and even slide down the fireman’s pole from the second floor down to the first. All thanks to my then Brother in Law who was a fireman and brought me to the Fire Hall once or twice. Not every kid has been that lucky and so a toy fire truck would have to do. Toy firetrucks have been popular since the 1920s and before them there were toy horse drawn fire wagons as far back as the 1880’s. (A hundred and thirty five years later and toy fire trucks are still being sold today… WOW!)

Knowing the international success of these toys prompted Japanese Toy Company Takara to creat the first Firetruck that transforms into a robot for their Diaclone line (Other firetrucks and transforming toys came first but not one that could be both) His designation was No.10 Fire Engine (not such a spiffy name as today’s TF standards but oh well!). He was a Japanese Mitsubishi Fuso F-Series FT fire ladder truck with the Mitsubishi Fuso logo molded onto the front of the cab. He came with a little robot pilot same as all the other Diaclone toys in that line.

Hasbro leased the mold for Takara toys to make their Initial G1 Transformers series and the above toy was turned into Inferno. Almost exact in detail to his original except for a few notable exceptions: No molded Mitsubishi Fuso logo, no extra chrome on the beam that connects the head and no Diaclone robot pilot. His forearms missile launchers were severely weakened for safety reasons. Also there were changes to the stickers including the addition of an Autobot emblem. (this toy was also retooled to be Grapple)

From the success of the first combiner (Devastator) Hasbro went ahead and made more combiners and in one set called the Protectobots was the team leader called Hotspot. This time a blue Mitsubishi Fuso Great fire engine. He became the torso of the combined robot Defensor.

Hasbro brought out their Headmaster sub-line and one such robot was Hosehead (At the time this was funny due to the SCTV Bob & Doug McKenzie calling each other Hoser…. another note Hosehead’s french canadian name is Boyau which translates to Gut) He transforms into undetermined model of Firetruck in red. Like all Headmasters his head can transform into a separate being this one is called Lug (Gut & Lug or Lug & Gut…. uggg) who can sit in the firetruck seat. 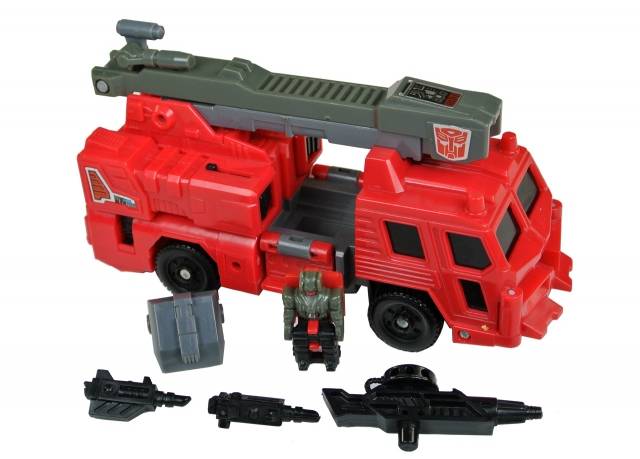 Hasbro discontinued G1 and brought out G2, mostly brightly colored repaints of existing toys. Inferno was back and he stayed the same color (shock!!), with some changes. No more firing missiles and a clip on water shooting cannon on his ladder. (G2 almost released Hotspot as well but it was cancelled)

Hasbro and Takara both released Robots in Disguise toyline and in a big change over Optimus Prime abandoned his Transport truck mode in favor for…. ready for it???…. yes a Fire Truck… In this case a red Japanese Hino Brandlier fire truck. The rest of the truck portion that separated from his robot mode could be placed on him to make armor. He could combine with Ultra Magnus of the same line to become Omega Prime. There is a few differences between both additions of him: the Takara release it has a darker, metallic-flake plastic, red chrome eyes for both modes and has no Autobot symbols on the shoulder pads. This toy would see four repaints which three were part of campaigns including a very rare version that saw only 10 units made and one other Toys R Us Exclusive version. A couple smaller versions of this guy were also made during this time.

Hasbro and Takara both released the original Inferno toy in their respective reissue series. Unlike the Takara version, the Hasbro version no longer featured launching fists or missiles for safety reasons.

Hasbro created an all-new Voyager class Inferno in the Universe line. (guess what??? Takara did too!) Unlike the original toy, he transforms into an American pumper/tanker fire truck without a ladder. This toy would be used later on in 2012 to make Hotspot in blue and a couple other non-fire trucks.

in order to appear to younger kids Hasbro brought out their Rescue bot line and what better for rescue then a fire truck. Heatwave transforms into a red and grey fire engine of a likely made up model with a simple transformation and a goofy fireman’s hat on his robot head.

With the Live action Dark of the Moon movie out, There was an Autobot Character named Sentinal Prime who transforms into a Rosenbauer Panther 6×6 airport fire truck. He had several Hasbro toys made in different classes including the big Leader class. (He was voiced by the late great Leonard Nimoy who also voiced the Decepticon Character Galvatron in the 1986 movie.) The actual screen used fire truck was entirely repainted specifically for the film, at a cost of thousands of dollars; such vehicles are required by FAA regulations to have a much lighter color scheme.

With Hasbro revisiting the Combining aspect with the new Generations sub-line called Combiner wars, the third set to be announced was the Protectobots with Hotspot returning as team leader and in blue but transforms into a Voyager class firetruck resembling a modified Rosenbauer Panther 6×6 (leading some to think that a Sentinal Prime repaint / retool is not that far off knowing Hasbro’s history with repaints)

So we have reached the end of this blog, I could have added the Transformers Animated Optimus Prime who is supposed to be a futuristic Fire truck but does not resemble any fire truck at all. As an archetype of children’s play the fireman and his trusty vehicle have been a chief component of imagination for over a 130 years and going strong. Shortly after the 100 mark Transformers took up that proud tradition and is still going strong today.

4 thoughts on “For the love of Firetrucks”