One Transformers that is often over looked is that of Ratchet the Autobot Medic. His first appearance in Transformers was a bit confusing for kids, His toy did not look like his animation model and that was weird for kids of the time. The reason is he like many of his compatriots were from Takara’s Diaclone line but unlike others (with the exception of remold partner Ironhide) He had no actual head in robot mode due to the fact he was meant to be a walking mech controlled by a robot pilot in a seat where the head would have been, (something along the lines of a Starwars AT-ST or fan named chicken walker) and had a pull away section weapon and tool array deck. Hasbro basically cheaped out and issued a sticker of his face to be placed on the seat back.His ambulance mode is based on a Nissan Cherry Vanette SGL Coach

Much later on (in the 2000’s) two Third party toy makers created add-ons to help solve the no head problem. One was Best Toys TransforGO!! clip on heads. He came in a two pack with one for Ironhide. They are nice and all and I dig the retro packaging.

Gear4Toys created a much better head and arms add-on for G1 Ratchet to bring him closer to the animated model, his existing arms fold up and swivel behind him to help keep the upgrade kit in place. He actually looks pretty good but his lower section is now a bit out of proportion but what can you do? (seen below with Ironhide who also got a snazzy looking head & arm upgrade)

His comic book appearance pretty much stayed the same but was radically updated when the cartoon series came out then both were unified.

In the Marvel comics the Autobot Medic tried to save lives and was trapped by Megatron and forced to save Starscream’s life, at the same time he was able to save Grimlock, Jazz, and Goldbug using pretender shells, (returning Goldbug into Bumblebee in the process because he wanted to, so it happened!) He then tried to sacrifice himself to kill Megatron but ended up a fused together mess, half Megatron, Half Ratchet (MegaMess?). The two were seperated safely but in the end poor ratchet became the head of Megatron’s hover chariot and would become the downfall of Megs, when Ratchet was killed and the link from when they were attached killed Megatron but woke up the sleeping Galvatron…. and that is another story….

In 2003 Hasbro’s universe line brought out Ratchet who transforms into an emergency-response Mercedes-Benz ML320 SUV with opening doors and hood. Over all this is one non-Ratchet looking toy

A “souvenir” package exclusive to BotCon 2005, Ratchet is a retooling of another bot with a new head, transforming into a large utility van. his lower vehicle portion becomes a mobile battle/repair platform while in robot form (pretty much like his G1 counterpart) but this time he can fold up and connect to his platform for a “battle mode” (You tell me does this make him too weird?).

2007 was a big year for Ratchet, he was included in the encore series, same G1 mold but this time instead a sticker the box had a cut out face and chest section that could be put in his windshield (not much better but it was worth a try to stay cheap).

In 2007 he was also featured in the live action Transformers Movie. This time he transforms into a green AM General Hummer H2, (I thought only his patients turned green!) he has had a lot of toys in both greens and original G1 colors. He is still a medic and had a fatal run in with the Cybertronian Mercenary Lock Down (not the only time in the alternate realities that the two have met)

2007 was also the year that Transformers Animated came out and yes Ratchet the medic was there too, with a more cartoony like appearance and kind of taking over the older more seasoned bot that Ironhide and Kup filled. He had a couple run ins with the Cybertronian Mercenary Lock Down on two occasions and in this reality he came out on top and lived! His alternate form looks like a mixture of his G1 and Movie appearances

2008 came Ratchet Emergency Green, a redeco of his Encore reissue which homages the live-action movie Ratchet, a Japanese mail-away exclusive available with a purchase of the book Transformers Visualworks. Purchasers could mail in a ticket from the book and purchase either one (5200yen) or two (10,000 yen) of the item.He comes in the same packaging as the regular Encore release, including packaging images, instructions, and the same white-headed cardboard torso punch-out

in 2009 Ratchet appeared in both Hasbro’s universe line and Takara’s Henkei! Henkei! line in pretty much his old G1 self but closer to his Animated model, with a head. As with his animated alternate form above this one looks very similar but more realistic

In 2012 Ratchet was in Transformers Prime cartoon and was voiced by Jeffrey Combs (who has played nine different onscreen roles in the Star Trek universe and the only actor to play two different characters in the same ST episode with both roles actually being seen and not just heard). He was red and white again but his vehicle mode looks similar in ways to his Movie Hummer look and his robot look took ques from his former G1 self. The below toy is just one of several of course. (he even had a catch phrase “I needed that!”)

Also in 2012 Third party IGear created a hi quality Ratchet as if he was a Takara Masterpiece toy. He looks great and I would not mind adding it to my collection. (I hope Takara takes the hint and makes him!)

2013 Ratchet’s TF Prime appearance would get an overhaul, and he would come out looking more like a homage to Beast Wars Dinobot  His colorization, head and chest greatly resemble Beast Wars Transmetal 2 Dinobot (except his face is mirrored) , while his Drill weapon looks similar to the original Dinobot’s tail weapon. 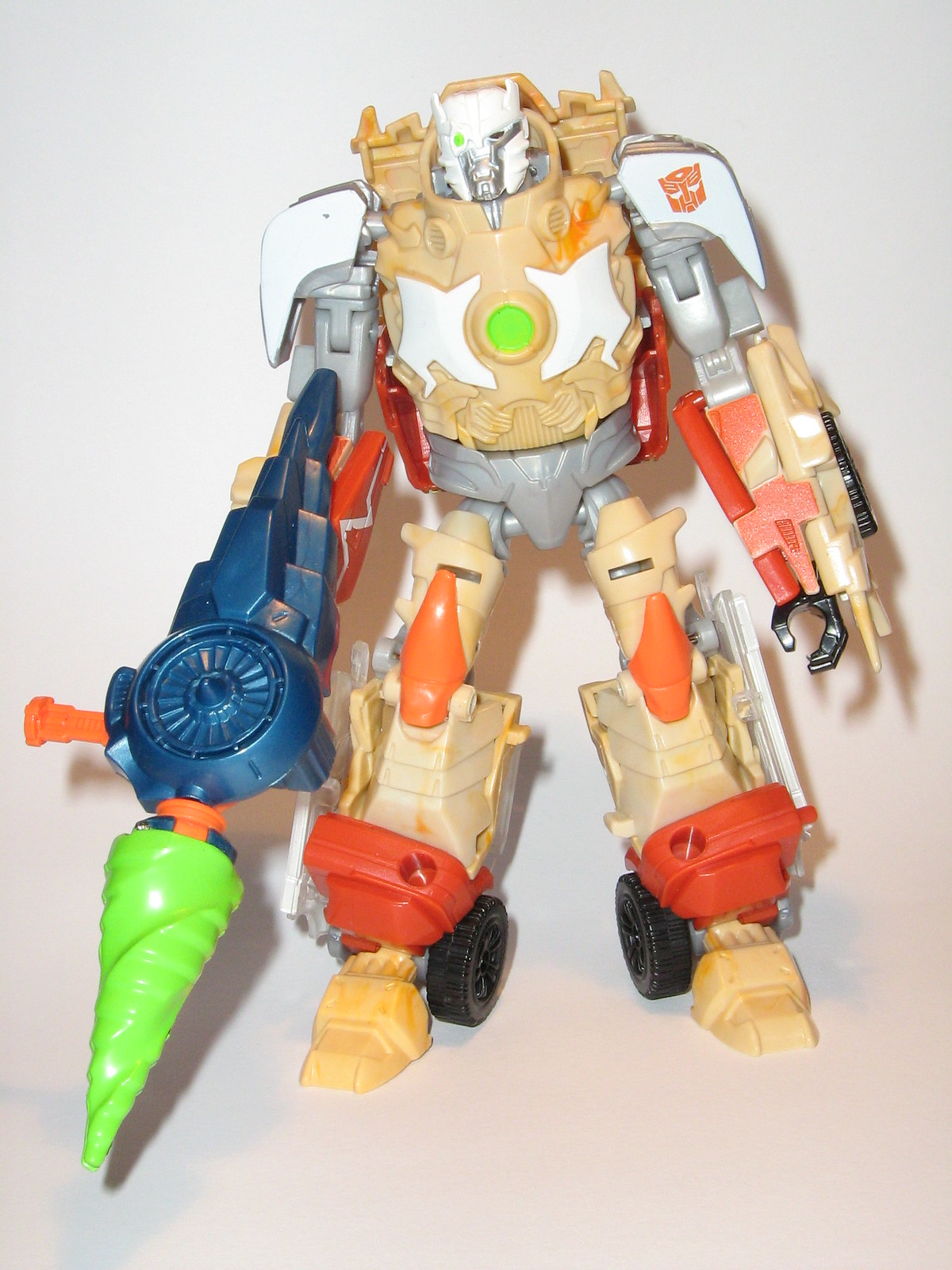 in comparison to the above mentioned Dinobot 2

We have come to the end of this blog, but hopefully not the end of Ratchet, the Autobot Medic is and has been a valuable addition to Optimus Prime’s troops. although other bots have been able to build or repair, there will always be one Ratchet…. (Well there will always be more toys named Ratchet that is for sure…)
I will leave you with the image of Ratchet beating the tar out of Thundercracker (just in case you thought Medics are wimps!) 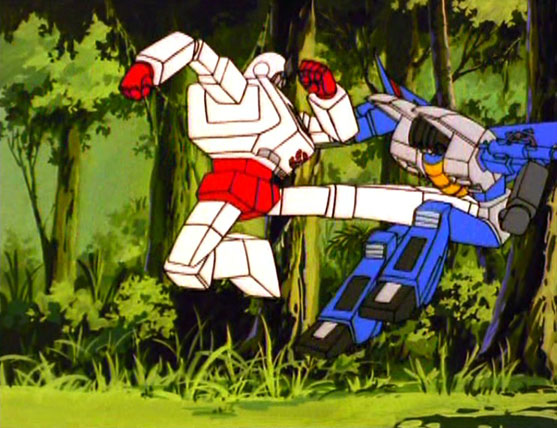 One thought on “Ratchet, from mech to medic!”