As Transformer jets go Starscream is the top flyer in the Decepticon ranks, leader of the Seekers and aspiring leader with a cowardly streak laced with treachery. He has mainly been a jet of one type or another over the course of 31 years in the western market with only the Alternator line to break this with a car for his alternate form. (note: I do not recognize the Action Master subline as true Transformers) So from here we dive into the realm of Starscream.

Japanese Toy maker Takara created their Diaclone line of toys, vehicles that transformed into robots, these had cockpits and came with a little robot to pilot them. out of this Hasbro chose many for Transformers and along with cars and trucks, two jets were picked. The one we will talk about today is the F-15 Robo Super-high-speed fighter type that became Starscream.

But Hasbro and Takara were not the only ones to produce transforming jet toys, “Kingdam 6” variant is in the center of a lot of controversy. First off it is unsure if it is a “Knock Off” of the Takara toy (where they either re-casted the original toy or made their own) or the company who released it were able to use the molds from Takara (who was known for renting out these molds for whatever country wanted them). I own one, and I like it. The plastic is more of pearl silver then the original release, the color scheme of the back fins are in the reverse although mine is missing the horizontal fins but I have seen examples pop from time to time. Looking at a true G1 seeker jet beside this version, you cannot tell the difference in the molds, it is all the colors leading me to think this was a rental agreement of the original molds. By and large this toy is hugely sought after by hard core collectors and even for the one I have (in bad shape, missing some parts that I paid $5 for at my local store) could score me over $50. the average collector frowns on it as a knock off and one friend says I should dump it and get an original G1 (no dumping here but originals are on the want list). It retained the Diaclone pilot which is very sought after as well (mine has it). Arguments will erupt over this toy, collecting is a personal journey… collect what makes you happy.

A little bit of Starscream trivia I picked up at a Transformer Convention: Each Character had several proposed names, Starscream was no different and two of these unused names were “Pretty Poison” and “Silver Snake”.

Hasbro Transformers and Takara have issued many Starscreams, most notable are: 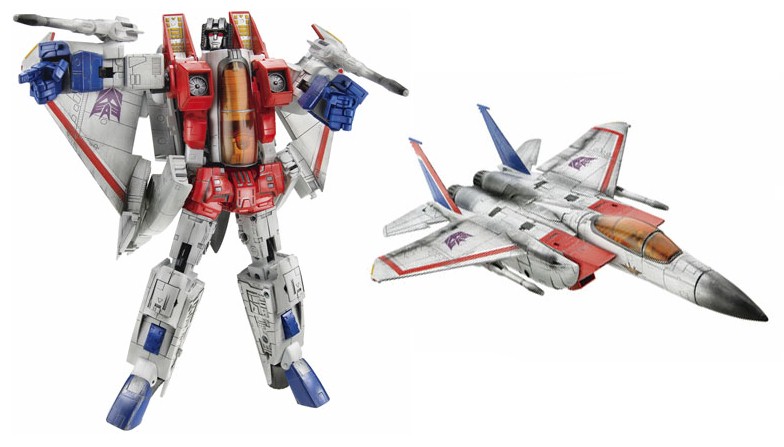 So here we pause not end, we know there will be more of Starscream and I know I missed a few here and there but I think it is enough for now, he has seen a few deaths, became a ghost but he still comes back for more and consumers and collectors will be around to buy him. Thank you for joining me, see you next time

One thought on “You scream, I scream, we all scream for Starscream!”